BY JOSEPH WOLKIN
As seen in Syosset-Jericho Tribune 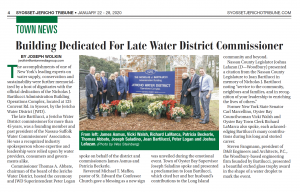 The accomplishments of one of New York’s leading experts on water supply, conservation and sustainability were further memorialized by a host of dignitaries with the official dedication of the Nicholas J. Bartilucci Administration Building Operations Complex, located at 125 Convent Rd. in Syosset, by the Jericho Water District (JWD).

The late Bartilucci, a Jericho Water District commissioner for more than 45 years, was a founding member and past president of the Nassau-Suffolk Water Commissioners’ Association. He was a recognized industry spokesperson whose expertise and leadership were relied upon by water providers, consumers and governments alike.

Commissioner Thomas A. Abbate, chairman of the board of the Jericho Water District, hosted the ceremony and JWD Superintendent Peter Logan spoke on behalf of the district and commissioners James Asmus and Patricia Beckerle.

Reverend Michael T. Maffeo, pastor of St. Edward the Confessor Church gave a blessing as a new sign was unveiled during the emotional event. Town of Oyster Bay Supervisor Joseph Saladino spoke and presented a proclamation to Joan Bartilucci, which cited her and her husband’s contributions to the Long Island community and beyond.

Steven Fangmann, president of D&B Engineers and Architects, P.C., the Woodbury-based engineering firm founded by Bartilucci, presented a beautiful etched glass trophy award in the shape of a water droplet to mark the event.

Board meetings will be held the first and third Wednesday of each month at 8:30am at the District Offices.

On behalf of the Jericho Water District (JWD or District), D&B Engineers and Architects (D&B) has prepared this document in accordance with the requirements of . . .

The Jericho Water District has received a deferral renewal from the New York State Department of Health for the new 1,4-Dioxane Maximum Contaminant Level (MCL)

As stated in previous quarterly reports posted on this website, the District is currently moving forward with the construction of treatment plants designed to remove . . .

There are two ways to sign up! Complete the E-Billing Enrollment Form enclosed with your next bill and mail it with your payment coupon. Visit . . .

In keeping with our efforts to provide excellent customer service, the District is beginning a campaign to update contact information on our utility accounts. On your next . . .

Designed and developed by Progressive Marketing Group, Inc. Duplication without prior permission from Jericho Water District is strictly prohibited.